14th Meeting of the EPPO Panel on Bacterial diseases

The Panel on bacterial diseases met at the Bornova Plant Protection Institute in Izmir at the kind invitation of the Turkish NPPO. The meeting was held in connection with the First meeting of the Association of Phytobacteriologists (EAP). The EPPO Secretariat expressed its satisfaction that the two meetings can be held back to back for a mutual benefit. 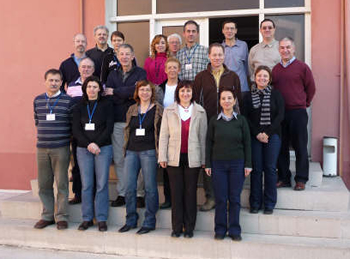 The following protocols were reviewed:

Revised drafts for Clavibacter michiganensis subsp. insidiosus, and Curtobacterium flaccumfaciens pv. flaccumfaciens were also reviewed and considered ready to be sent for country consultation later in 2009 (further work is needed on these protocols).

Regarding Xanthomonas vesicatoria it was noted that recent developments in taxonomy have consequences on the current draft which may need to be adapted. The Panel reviewed the different sections to identify the parts that needed to be adapted.

The Panel agreed to standardise the texts for the Immunofluorescence test (IF), ELISA and pathogenicity tests and experts volunteered to prepare it. A text for IF was prepared immediately after the meeting and after an email consultation with the Panel it was concluded that it should be presented for adoption as a standard in the series PM 7.

Following comments questioning whether pathogenicity tests should always be performed for the identification of a bacterium, the Panel agreed that the inclusion of pathogenicity tests in diagnostic protocols should be considered on a case by case basis.

The Panel was informed of the latest developments concerning the EPPO programme on quality assurance and accreditation and in particular the new standard Specific requirements for laboratories preparing for accreditation for plant pest diagnostic activities. This standard gives guidance on how validation of a test should be performed. It also describes how laboratories can demonstrate that they perform a validated test correctly (verification). The Panel on bacterial diseases suggested that more guidance should be given in this standard on validation of reagents and this suggestion was presented to the EPPO Panel in charge of the development of the standard.

The EAP recommended that Acidovorax avenae pv. citrulli should be added to the EPPO Alert List and should be considered as a priority pest for PRA: this pest has been detected every year to varying degrees of significance in melon production areas nationwide.

The Secretariat informed the EAP that EPPO had initiated a revision of the current Lists of pests recommended for regulation in order to evaluate the pests that should be deleted from these lists. The EAP welcomed the possibility to be associated with this review.

The next meeting of the Panel on bacterial diseases is scheduled for 2010-03-22/26 in Ljubljana, at the kind invitation of Ms Dreo and Ms Ravnikar.