The pollen beetle, Meligethes spp., has built up resistance to pyrethroid insecticides in recent years in several EPPO countries, due to the almost exclusive use of this chemistry. Due to the significance of the problem, an ad hoc EPPO Workshop on insecticide resistance of pollen beetle on oilseed rape was held on 2007-09-03/05 at the BBA Berlin-Dahlem, Königin-Luise-Strasse 19, 14195 Berlin, Germany.

The ad hoc Workshop was organized in collaboration with the Federal Biological Research Centre for Agriculture and Forestry (BBA) and the German Federal Ministry of Food, Agriculture and Consumer Protection.

The participants were welcomed by Dr Georg Backhaus, President of the BBA, who kindly accepted to host yet another EPPO workshop. Special thanks are due to Messrs Matussek and Aganese and their colleagues for their successful organization of the meeting. EPPO Secretariat would also like to thank the programme planning committee who helped in structuring this workshop and finalizing the conclusions: Udo Heimbach, BBA Braunschweig; Alan McCaffery, Syngenta, IRAC Chairman; Ralf Nauen, Bayer CropScience, IRAC Vice Chairman; David Richardson, PSD York and Russell Slater, Syngenta, Chairman-IRAC Pollen Beetle team. There were 51 participants from 17 EPPO countries and 11 agrochemical companies.

The aim of this ad hoc workshop was to share knowledge, identify gaps in knowledge and research needs, explore current and potential strategies for control of the pollen beetle, learn from the experience of others, avoid unnecessary duplication of work (e.g. resistance monitoring efforts) and to develop recommendations on resistance management for EPPO member countries. 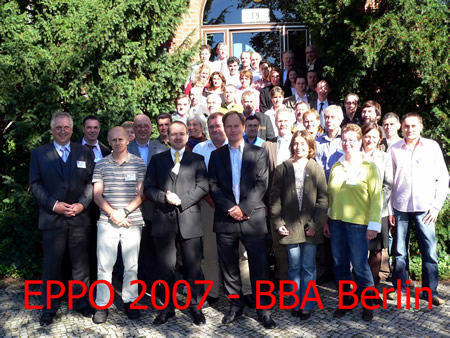 Consequences of the inhibition of oxidative metabolism resistance in pyrethroid resistant pollen beetles on the activity of alpha-cypermethrin
Martin Heger and Fabrice Robin, BASF

Pyrethroid resistance status of pollen beetle populations in Germany in 2006 and 2007
U. Heimbach, A. Müller, T. Thieme