38th Meeting of the Panel on Phytosanitary Measures

The Panel met in Paris at the headquarters of the French NPPO. The main task of this Panel is to evaluate risks presented by specific pests and design phytosanitary measures to avoid their introduction and spread.

The first day of the meeting was dedicated to the issue of specific risks presented by large plants. It was acknowledged that imports of rooted plants for planting grown for more than 1 growing period before import could present a significant risk. It was noted that EPPO has already developed standards to address this issue but that these should be promoted, so that they can be better implemented in practice. Guidance on good production practices for nurseries (including guidance on what is a nursery) will also be developed. A future programme on non-specific risks will be presented to the Working Party. 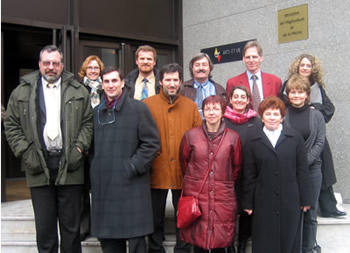 On a case by case basis, the Panel reviewed the present situation and conclusions from PRA and made the following recommendations to the Working Party:
Additions to the A lists: Phytophthora lateralis (A1), Homalodisca coagulata (A1).

Transfer from A1 to A2: Anoplophora chinensis. Pest Risk Management options will be presented to the Working Party for Paysandisia archon, Rhynchophorus ferrugineus and Hesperophanes campestris, and if accepted these pests will be recommended for regulations.

As usual, the Panel reviewed in detail the EPPO Alert List whose purpose is to warn countries about possible new risks, and in certain cases to propose candidates for PRA and eventually regulation. The Panel proposed to consider the following pests for addition: Diaphania indica, Cryptophlebia leucotreta, Leucinodes orbonalis, Meloidogyne minor and Spiroplasma kunkelii.

The Panel discussed how the different pest lists should be maintained by EPPO. It noted that the EPPO Secretariat should continue to document pests which were recommended for regulations (A1 and A2 pests). It was agreed that the Alert List should continue to be used as a tool to draw attention of countries on new potential risks, and that the new Action List was also a useful tool to focus on pests for which phytosanitary action was needed (either not yet regulated or against which particular measures should be taken). The Panel also suggested that in the short term, plants should be treated in a similar way as pests and diseases.

Within the framework of the new PRA process, the Panel discussed how an endangered area could be defined. It agreed that the endangered area should only be delimited by ecological factors (although it should be also demonstrated that some unacceptable economid damage might occur in some parts of this area). It will then be the responsibility of the countries to determine whether they are part of this endangered area or not, based on national criteria.

The Panel discussed the terms of reference of the Working Party and made some modifications to it. The Panel also reviewed the situation of the ad hoc Panel on Diabrotica virgifera, and proposed this Panel should no longer be convened.