held jointly with the 9th Annual Meeting of European Mycological Network
Ås, NO, 2005-05-13

EPPO participated at the 9th meeting of the European Mycological Network (EMN) which took place in Ås, Norway, on 10-13 May 2005, at the Plant Protection Centre of the Norwegian Crop Research Institute. There were 28 participants from 16 countries. The last day of the meeting was consecrated to the joint EMN/EPPO Session. The EMN experts continued their work on the revision and preparation of mycological diagnostic protocols. So far, 15 EPPO Standards on diagnostic protocols for fungi are published in series PM 7 (Phytosanitary Measures), 7 are in different stages of preparations (Ceratocystis virescens, Diaporthe vaccinii, Gremeniella abietina, Gymnosporangium spp., Ophiostoma wageneri, Plasmopara halstedii, Verticillium albo-atrum & V. dahliae) and 7 are promised (Alternaria gaisen, A. mali, Gibberella circinata, Melampsora medusae, Phytophthora fragariae, Thecaphora solani, Venturia nashicola).

This year only one protocol (Phytophthora ramorum) will be presented to the Working Party for approval. The meeting also took note of the following important topics discussed at the meetings of other related Panels and the Working Party on Phytosanitary Regulations: knowledge erosion in phytopathology, validation of diagnostic protocols (ring-testing, proficiency testing), new instructions for authors of diagnostic protocols, development of a standard on reporting of a diagnosis, collaboration with the IPPC Technical Panel on Diagnostic Protocols.

The next EMN meeting is planned on 2006-04-25/28 in Wageningen (NL). Thanks are due to the EMN members for their active participation and Norwegian colleagues, Mrs Talgo and Mrs Herrero, for the fine organization of the meeting. 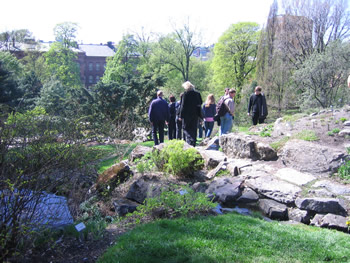