Surveys for Paysandisia archon have been conducted in Apulia region (South Italy) since the first detection of one large caterpillar in late spring 2004. Data collected during 2005 showed that P. archon had spread over the territory, but had so far only been reported in nurseries. Along the Adriatic coast, tall, old palms (Phoenix, Washingtonia and Chamaerops excelsa) are grown in private gardens in the vicinity of urban areas. Many of them were planted during the second half of the last century and are near historical residences.

Recent observation (2006) in the Polignano a Mare area (Province of Bari) revealed that five Phoenix canariensis, all three metres tall, and growing far from infested nurseries, showed signs of damage. We observed galleries up to 1-1.5 cm in diameter, filled with plant scraped matter, ranging from the stipe to the leaf base. Moreover, we were able to collect several larvae, one of which referable to a third instar while the rest resembled adult caterpillars. One pupa exuvia was also found crushed inside a gallery. The instars of collected caterpillars and the presence of a pupa exuvia suggest that two larval cycles had already taken place in the Phoenix tree and that a third one was ongoing. The infestation likely started from eggs laid in spring or early summer 2004 by a butterfly, probably coming from infested nurseries.

This is the first report of damage by Paysandisia archon outside of nurseries in South Italy. Thus the undesirable scenario that we depicted in our last report (Porcelli et al., 2005) has unfortunately occurred. Local Authorities (Osservatorio Fitopatologico – Università) have been alerted and will monitor the spreading of P. archon in order to preserve the historical palms in Apulia region. 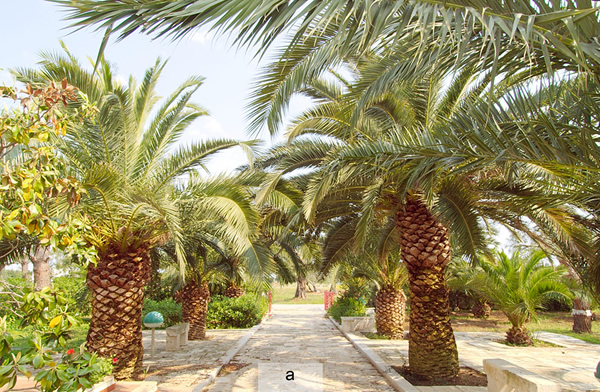