The yellow vein clearing disease is an emerging disease of citrus that was first observed in Pakistan in 1988 in lemon (Citrus limon) and sour orange trees (C. aurantium). In 1997, the disease was observed in several citrus-growing areas of India on different citrus species (Etrog citron (C. medica var ‘Etrog’), Rangpur lime (C. x limonia), sour orange, and lemon). In 2000, the disease was reported from Türkiye in lemon and sour orange trees, and in 2009 it was also found in lemon trees in Yunnan, China. The presence of a filamentous virus was consistently observed in symptomatic plants, but its identity remained unknown until 2012, when serological, molecular and biological studies showed that a new virus species called citrus yellow vein clearing virus (Potexvirus, CYVCV) was the causal agent of the disease (EPPO RS 2013/196). Since then, CYVCV has continued to spread in China and other Asian countries and has recently been reported in California (US), a first record for the Americas. Considering the potential impact of this emerging disease on citrus production, the EPPO Secretariat considered that CYVCV should be added to the EPPO Alert List. 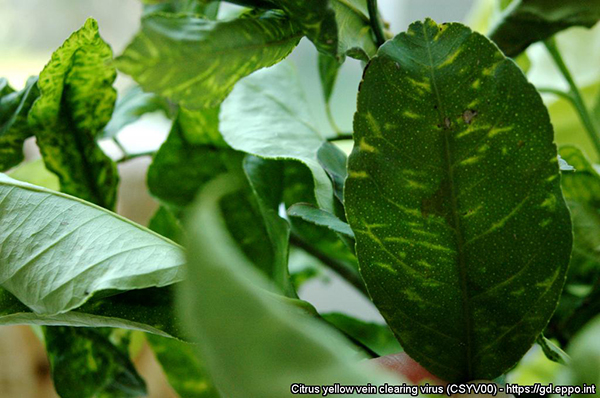 CYVCV can infect most citrus species, cultivars and hybrids, particularly lemon (C. limon) and sour orange (C. aurantium). In Türkiye, in addition to the findings on citrus, CYVCV has been reported once on grapevine (Vitis vinifera) plants showing leaf necrosis, small leaves and shortened internodes. In addition to citrus and grapevine, CYVCV has also been detected in asymptomatic wild plants (Malva sylvestris, Ranunculus arvensis, Sinapis arvensis and Solanum nigrum).

CYVCV can be transmitted by grafting and contaminated tools. In addition to mechanical transmission, CYVCV is transmitted by insect vectors. Two aphid species, Aphis spiraecola and A. craccivora have been shown to transmit CYVCV from infected lemons to legumes. In addition, A. spiraecola A. gossypii and Dialeurodes citri (citrus whitefly) could successfully transmit CYVCV between citrus species. It is thought that disease spread in the field is mainly ensured by insect vectors. So far, seed transmission of CYVCV has not been demonstrated.

Citrus spp. are economically important trees for the Mediterranean Basin, cultivated for fruit production and ornamental purposes. CYVCV is causing an emerging disease which can potentially have negative impacts on citrus production by affecting tree growth and fruit marketability. The fact that CYVCV has been detected in grapevine in Türkiye may also add to the risk. The current distribution of CYVCV is limited in the EPPO region, however its known insect vectors are present to ensure its further spread. As CYVCV can be spread by the movements of infected propagation material, as well as by grafting and contaminated tool, it is important that NPPOs of the citrus-growing countries of the EPPO region are alerted about this new citrus disease.