Pontederia cordata (Pontederiaceae) is commonly utilised as a pond plant in the EPPO region. In some areas where the plant is grown it has shown invasive tendencies. The EPPO Panel on Invasive Alien Plants are seeking further information on the occurrence and behaviour of P. cordata in the EPPO region, outside of gardens and planted areas. 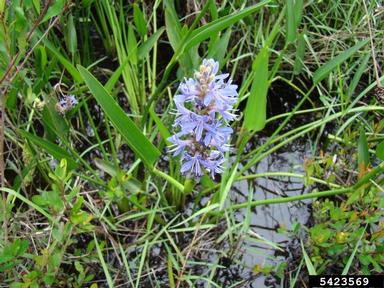 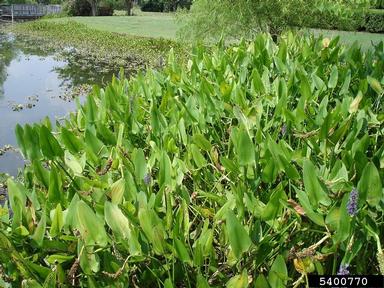 Pontederia cordata is a long-lived rooted freshwater plant 1-2 m tall that grows in clusters and forms colonies. The stems are smooth, emerging above the water surface and branched, each bearing a leaf and a flower spike. The leaves are light or yellowish green, cordate in shape, 230 mm long by 70 mm wide. Leaves appear one per stem each with a long petiole that clasps the stem. The flowers of P. cordata are blue and appear at the terminal end of the stem. The flowers are on long spikes which are 50-150 mm long. Each flower is 15 mm long and the upper petal has a yellow blotch in the centre.

Pontederia cordata is a perennial species that reproduces by seed and vegetatively from fragments of rhizome which can take root and form new infestations.

Pontederia cordata grows in well saturated soils, at the interface between the aquatic and terrestrial environments, and in slow moving water bodies up to a depth of 40 cm. P. cordata can grow either rooted to a substrate (pond margin) or free-floating. It can grow in marshes, streams with standing water, ponds and shallow lakes. P. cordata can be found in urban and semi-urban habitats where it has escaped or been dumped from gardens.

Pontederia cordata is a popular ornamental plant grown in gardens and parks. The species is widely traded in the horticultural industry.

The invasive nature of P. cordata has been recorded in both the native and some of the introduced range. In South Africa, the species is recorded to compete with indigenous riverbank plant species and crop species when it encroaches in irrigated fields. P. cordata can form dense stands which can block drainage canals and obstruct access to the edges of water bodies. P. cordata can have a negative impact on local biodiversity by outcompeting native plant species and on ecosystem services.

Controlling P. cordata can be difficult due to the habitat the species grows in. Physical control measures can be applied but to be successful, all parts of the plant must be removed. Chemical control can be effective against P. cordata, but herbicide use in or near waterbodies is often highly restricted.