Toumeyella parvicornis is a scale pest of Pinus spp. which was first described in Florida (US) in 1897 and was only known to occur in North America until the early 2000s. It was accidentally introduced into Turks & Caicos Islands (2005) and Puerto Rico (2009) where it was found on endemic pine species (P. caribaea var. bahamensis and P. caribaea var. hondurensis, respectively). In 2014, its presence was first recorded in Italy, in several municipalities of Campania region (Naples and neighbouring municipalities), infesting Pinus pinea in urban environments. By 2020, the pest had spread to a larger area along the coast from Caserta to Salerno causing serious damage. In 2018, T. parvicornis was found in the city of Roma (Lazio) damaging pine trees and raising concerns from the general public, as P. pinea is an iconic tree in the city landscape, and in 2021, it was also reported in Abruzzo and Puglia regions.  In Southern France, T. parvicornis was reported for the first time in 2021 near Saint Tropez (Var department). 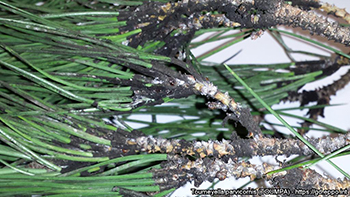 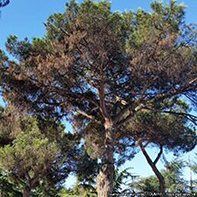 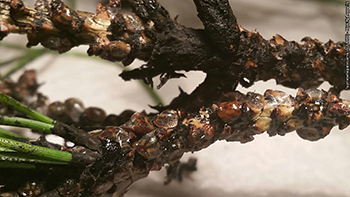 Feeding of the nymphs and adult females on the twigs causes branches to die (flagging). Heavily attacked trees turn yellow and finally may die. The scale produces large amounts of honeydew on which black sooty moulds develop, hindering photosynthesis and thus contributing to tree decline. Ants often feed on the sugary honeydew. In Puerto Rico, Solenopsis invicta (fire ant) and Wasmannia auropunctata (little fire ant) were observed in association with T. parvicornis. In North America, T. parvicornis periodically causes mortality of pine seedlings and saplings. It is considered as a pest in young pine plantations, seed orchards and Christmas tree farms. In Turks and Caicos Islands, the situation has been particularly severe with high levels of pine tree mortality. On these islands, P. parvicornis infestations are threatening the survival of the endemic pine, P. caribaea var. bahamensis and restoration programmes are being implemented.

Eggs are small, pinkish and ovoid. The first instar nymphs are the mobile stage (crawlers). Once they have selected a feeding site, they remain in place. Females have 3 nymphal instars, and an adult stage. Mature females are oval to elongate, 3.5 to 5 mm in length and 3.0 to 4.0 mm in width, reddish brown, mottled with darker spots. The shape and markings give the scale the appearance of a tortoise shell, hence its name. Two distinct morphological forms have been observed, depending on the part of the plant where females are present: a shoot/twig form and a needle form. Males have 2 nymphal instars followed by prepupa, pupa and adult stages. Adult males are brown with white wings. In the northern part of its range, T. parvicornis has only one generation per year, whereas in the southern part of is range, several generations (up to 4) can be completed. In areas with cold winters, the scale overwinters as fertilized, immature females. In Campania (IT), at least 3 generations, partially overlapping, have been observed on P. pinea.

Crawlers can move from infested trees to adjacent pines, but can also be carried by wind for longer distances. They can also transported by other animals (birds, insects) or machinery. In Campania, it is thought that the widespread presence of P. pinea along main roads has contributed to its rapid spread. Over long distances, movement of infested plants for plantings and cut branches, including Christmas trees, can transport the pest. The pathway of introduction into Turks and Caicos Island is suspected to have been the import of live, cut pine trees from the USA that were intended to be used as Christmas trees.

Pine trees are widely planted across the EPPO region for forestry and ornamental purposes. In its invaded range, T. parvicornis has shown invasive behaviour and can be a serious pest of pine trees, both in the natural environment (in Turks and Caicos Islands) and in an urban environment (Italy). On ornamental pine trees, dieback and development of sooty moulds reduce the aesthetic value of the plants. As for many other scale insects, chemical control is generally difficult, and may not be possible in forest or urban environments. In North America, several species of natural enemies have been observed. In Campania (IT), Metaphycus flavus (Hymenoptera: Encyrtidae) has been observed parasitizing T. parvicornis, but it was not able to hamper pest spread or prevent pine dieback. In this region, phytosanitary measures have been taken to contain the pest, and include surveys to delimit infested areas, destruction of infested plants, restrictions on the movement of plants outside demarcated areas and appropriate pest control. As T. parvicornis could be a threat to pine trees in urban environments and possibly in forests, it is advisable to monitor the situation of this pest in the EPPO region.