Resseliella citrifrugis (Diptera: Cecidomyiidae) is an economically important citrus pest in China, which has recently been intercepted in the EPPO region. Live larvae of R. citrifrugis have been detected several times by the Dutch NPPO on pummelo (Citrus maxima) fruit imported from China. In addition, risk assessments conducted by EPPO and JKI, Germany (as part of the DROPSA project), as well as by EFSA have concluded that R. citrifrugis presents a risk to citrus cultivation in the EPPO region. 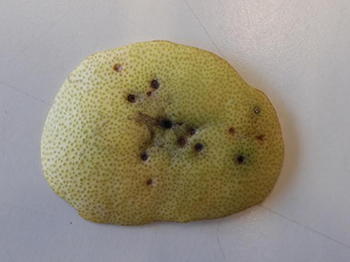 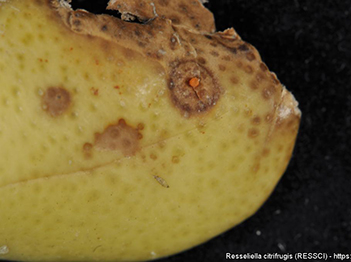 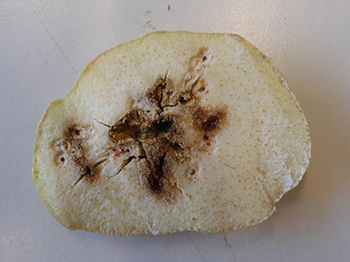 R. citrifrugis occurs in China, in areas with tropical, subtropical and temperate climates.

Larvae feed inside citrus fruit causing brown discoloration in the white mesocarp. Brown circular spot and exit holes can also be observed on the fruit skin (i.e. exocarp and mesocarp). Attacked fruit may drop prematurely. In a single fruit, several hundreds of larvae can be observed. In the case of the Dutch interceptions, approximately 25 live larvae were observed within the skin of the fruit.

R. citrifrugis is a small insect. Adult females and males are approximately 2-3 mm and 1.8-2 mm long, respectively. Pupae are 2.7-3.2 mm long, reddish-brown and becoming dark brown prior to adult emergence. There are 4 larval instars and full-grown larvae are 3-4 mm long and reddish in colour. Depending on geographical location, R. citrifrugis has 2 to 4 generations per year. In Southern China, mature larvae overwinter in the soil or in the fruit.

Over short distances, natural spread can be ensured by larval movements (mature larvae can jump) and adult flight aided by wind. Over long distances, trade of infested plant material and possibly other human activities (e.g. travels) can transport the pest.

Citrus spp. are economically important fruit crops around the Mediterranean Basin. R. citrifrugis is absent from the EPPO region and considered to be a major citrus pest in China, causing economic losses to growers. It is estimated that these losses vary from 10 to 100%, depending on how citrus orchards are managed. Control measures are applied in citrus orchards in China to limit insect populations and include prophylactic measures (e.g. removal of fallen and infested fruit), fruit bagging, and insecticide applications. Data is limited on the biology of the pest, but it has been observed in various climatic zones in China, suggesting that its establishment in the EPPO region might be possible. The fact that R. citrifrugis has been intercepted in fruit trade clearly shows that this insect has the potential to enter the EPPO region. Among uncertainties, it can be noted that the taxonomic status of R. citrifrugis is still unclear as no description or definition has been published according to the rules of the International Code of Zoological Nomenclature (nomen nudum). Citrus-growing countries of the EPPO region should pay attention to this insect, and it can be noted that the European Union has recently taken measures to prevent the introduction of R. citrifrugis on its territory.