Pochazia shantungensis is damaging fruit tree pest. It is native in China and invasive in the Republic of Korea, and it was recently reported for the first time in the EPPO region, both in Turkey and in France (EPPO RS 2021/129).

P. shantungensis was first described in China in 1977. It was introduced in the Republic of Korea in 2010 and rapidly spread. It was collected for the first time in 2018 in the European part of Turkey (it was subsequently also found on the Asian side of the Istanbul area) and in Southern France. 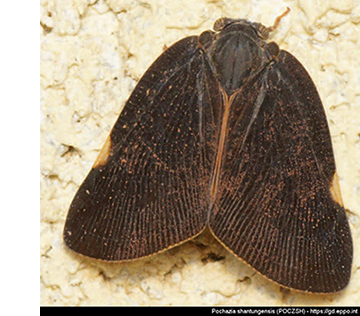 This pest directly causes damage by sucking plant sap as well as by damaging young branches when females insert their eggs. It also indirectly induces the development of sooty mold on leaves as a result of honeydew secretion. One generation per year is observed in the Republic of Korea but two generations occur per year in China. The pest overwinters as eggs on trees only. Eggs are covered with white wax filaments. Overwintered eggs start to hatch from May in the Republic of Korea. Nymphs seem to prefer herbaceous plants rather than trees. Adults can be observed from July, and the new generation of overwintering eggs are generally found until late August in the Republic of Korea. Adults are about 15 mm long.

In the Republic of Korea, control of the pest in orchard requires insecticide application targeting the egg stages. Overall, the population of P. shantungensis in agricultural areas has increased by over 100% each year from 2015 to 2017, causing serious economic damage. In China, damage is reported only from Zhejiang.

Data is missing on its natural spread, but adults can fly and have the highest mobility among all developmental stages. Nymphal stages are also mobile. Over long distances, the movement of host plants can transport the pest as eggs.

Plants for planting of host plant species from countries where P. shantungensis occurs. As eggs are mostly laid on young branches, wood is unlikely to be a pathway.