Lambdina fiscellaria was recently identified as a potential threat to Sitka spruce plantations in Ireland, and to Nordic coniferous forests when screening for potential pests associated with trade of ornamental plants. The EPPO Panel on Phytosanitary Measures recommended its addition to the EPPO Alert List.

The hemlock looper is split into three subspecies, on the basis of differences in feeding preferences of the larval stages, but there are no morphological differences: 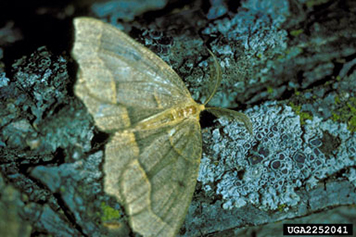 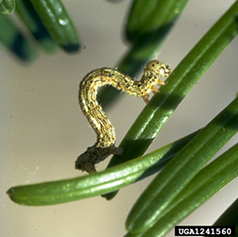 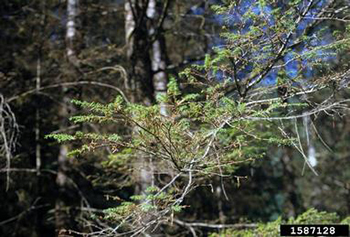 The hemlock looper is very polyphagous, and its known hosts include both coniferous and deciduous trees. The preferred larval host plants vary depending on the subspecies and the diet of the first instars is more restricted than later instars. Major hosts include Abies balsamea (balsam fir), Picea glauca (white spruce), Tsuga spp. (hemlock), Picea sitchensis (Sitka spruce), Acer spp. and Quercus garryana. During outbreak years, larvae can be found feeding on a significant number of tree species as well as understory plants.

Damage to plants is caused by the larvae that feed on needles and leaves. During severe outbreaks, trees can be completely defoliated over large areas.

Adults can fly short distances. First instar larvae are capable of moving to find a suitable host, as eggs are often laid on old stumps, in mosses or on the forest ground. Pupae and egg masses may be present on wood, as well as on mosses and lichens that are harvested in forest. As the pest is mainly associated with forest areas, its introduction in the EPPO region with plants for planting is considered unlikely by the Irish Pest Risk Analysis.

Plants for planting, wood, mosses and lichens harvested in forests? from areas where L. fiscellaria occurs.

L. fiscellaria occurs in regions with similar climates to the EPPO region, it has a wide host range and some host plants are widespread in the region. If it was introduced, it could cause similar outbreaks as in its area of origin. Current phytosanitary measures on wood of major hosts can mitigate the risk of entry but, during outbreaks, the pest may be associated with many plant species that are not regulated. The trade of mosses and lichens from USA to the EPPO region has recently increased and is not covered by any phytosanitary regulation.