Euplatypus parallelus (Coleoptera: Curculionidae: Platypodinae) is an ambrosia beetle which has been reported to cause tree mortality. It is absent from the EPPO region, but it has been intercepted in trade. Considering the wide host range of E. parallelus, its invasive behaviour in Asia, and the fact that E. parallelus might be associated with pathogenic fungi and tree mortality, the EPPO Panel on Phytosanitary Measures suggested to add it to the EPPO Alert List.

E. parallelus is native to Central and South America, and has been introduced into Africa, Asia, and Oceania, probably with trade of timber. In Asia, it was first recorded in the 1970s in Sri Lanka and has since been reported in a large part of the continent, most recently in India (2012) and China (first on the island of Hainan in 2016 and Yunnan in 2019). 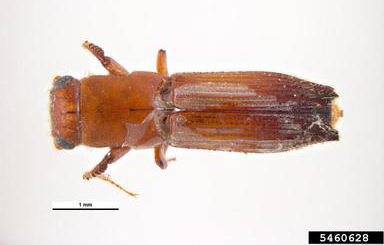 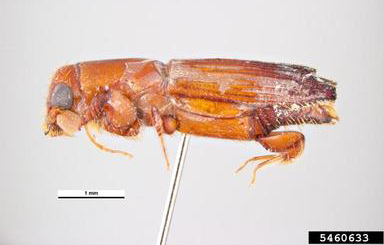 Damage is caused by adults boring galleries that may extend deeply into the wood, and by pathogenic fungi that are associated with the insect. External signs of attack are pinholes (entrance holes) on trunks and branches which are usually associated with frass and ‘toothpicks’ (compacted frass expelled from entrance holes), accumulation of frass at the base of the trunk, wilting, fallen leaves and eventually tree mortality. The internal walls of the galleries are stained a dark colour, due to the action of the symbiotic fungal species carried by the insect, some of which being possibly pathogenic to plants (e.g. Fusarium spp.). E. parallelus tends to attack trees that recently died or that are dying (stressed by various factors), but can also attack living trees that are apparently healthy. In India, serious infestations have been observed on healthy Areca catechu palms in Karnataka and Kerala, and mortality of rubber trees has been observed in Kerala. Tree mortality has also been observed on Pterocarpus indicus planted as shade trees along roads in Indonesia, as well as on Dalbergia sissoo in Bangladesh although in this latter case the exact role of E. parallelus could not be ascertained. Impacts relate to decrease in the value of the wood following attacks on live trees or recently felled wood, decrease of production in fruit trees, and may cause tree mortality.

There is limited information about the biology of the insect, but observations have been made on the life cycle of E. parallelus on rubber trees in Brazil. It was observed that males bored the initial gallery and were then joined by a single female (E. parallelus is a monogynous species) which continued to bore the gallery system. Eggs are laid in batches in the galleries. Larvae are apodous and when mature they construct their own pupal chambers. After pupation, adults emerge through the original entrance hole. Within a single gallery system, it was also observed that larvae at different stages, pupae and adults were present simultaneously (overlapping generations). Adult beetles are yellowish-brown and 3.8-4.5 mm in length.

No detailed information is available about the natural spread of E. parallelus, but adult beetles can move from tree to tree. In the EPPO region, this insect has been intercepted on several occasions on wood packaging material from India, wood of Entandrophragma cylindricum from Congo, logs of Tetraberlina bifoliata from Cameroon, and beetles have been caught in traps in the harbour of La Rochelle (FR).

Wood, wood packaging material, plants for planting of hosts of E. parallelus from countries where the pest occurs.

Most of the currently known host plants of E. parallelus are tropical and subtropical species which are not widely grown in the EPPO region. However, some of them are grown in the southern part of the region (e.g. Eucalyptus spp., Persea americana) or grown for ornamental purposes. Similarly, the potential for establishment under the climatic conditions of the EPPO region would need to be further studied. Control of E. parallelus is difficult because of the hidden life of this wood boring insect, and few natural enemies have been described. More information would also be needed on the symbiotic fungi that are associated with E. parallelus, as these are usually key in the potential impact of species. More details about the potential risks associated with E. parallelus can be found in the EPPO Study on the risk of bark and ambrosia beetles associated with imported non-coniferous wood. Although there is high uncertainty about the potential of establishment and economic impact of E. parallelus in the EPPO region, particular attention should be paid to these ambrosia beetles which have the capacity to attack apparently healthy trees and cause mortality under certain circumstances.