Agrilus mali (Coleoptera: Buprestidae – apple buprestid) is a wood boring insect which can cause significant damage to apple trees (Malus spp.). It is native to the Eastern part of Asia (Northeastern China, Russian Far East and Korean peninsula). In Northeastern China, A. mali was considered as a sporadic pest in the major apple production areas (e.g. Shaanxi and Shandong). In 1993, it was discovered in Northwestern China, in an apple (Malus domestica) orchard in Xinyan county (Xinjiang province), and since then it rapidly invaded wild apple (Malus sieversii) forests in the Yili Valley of Tianshan Mountains. In this area, extensive mortality of M. sieversii has been reported. Considering the potential damage A. mali could cause to Malus species, the EPPO Panel on Phytosanitary Measures recommended to include it in the EPPO Alert List. 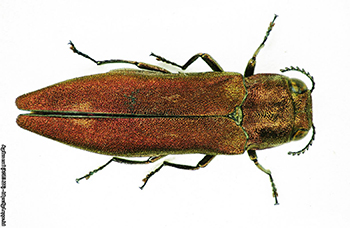 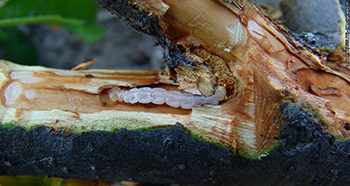 From left to right: Adult – Larvae – Infested area in China
All pictures were kindly provided by Dr Wang Zhi-Yong 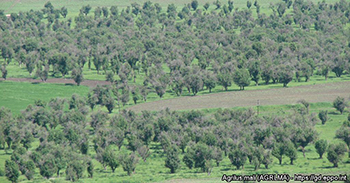 A. mali originates from Asia.

A. mali is a pest of Malus species, cultivated and wild. In addition to apple trees, A. mali has been reported on pear (Pyrus spp.), peach (Prunus persica) and cherry (Prunus avium) but data is generally lacking on the host status of these plant species. Studies on maturation feeding of adult beetles have shown that Malus halliana and M. domestica were suitable hosts, whereas Pyrus betulifolia and Prunus persica were not suitable.

As for other Agrilus species, damage is mainly caused by larval feeding. Adult beetles feed on leaves (maturation feeding) but do not cause significant damage. Larvae bore extensive galleries beneath the bark (phloem, cambium, and outer xylem tissues), thus disrupting the vascular system of the plant. Attacks by A. mali can lead to defoliation, branch and tree dieback, and eventually tree death. In addition, it has been observed that attacked trees were more susceptible to fungal infections (e.g. by Valsa mali), which may accelerate tree decline. In Russia, A. mali is considered as a pest of apple trees. It is also included in the quarantine list of the Eurasian Economic Union (as an A2 pest). In China, recent literature mainly focuses on the damage caused by A. mali to wild apple trees in Xinjiang province. From 1993 to 2013, it is estimated that A. mali has damaged 40% of the area of wild apple forests and caused the death of thousands of M. sieversii trees in the Tianshan Mountains.

Adults are 8-10 mm long, variable in colour from bronze to metallic green. Larvae are creamy white, 18–20 mm long. In China, five larval instars have been observed. Pupae are 10 mm long, whitish yellow. Eggs are oblong, initially creamy white and then gradually becoming yellow. The life cycle of A. mali has been studied in Xinjiang province. A. mali has a univoltine life cycle and generally overwinters as young larvae inside their galleries. However, it is not known whether A. mali might require 2 years to complete its development in different conditions (e.g. colder climates). From late July to the beginning of September, adult females lay eggs (up to 60–70), preferably on young branches or new shoots. Larvae then start feeding and boring galleries until the next spring. The following year, from late April to late June, they start building pupation chambers in the wood. Depending on environmental conditions and tree age, pupation takes place over 2-3 months, and adult emergence occurs from the beginning of June to the end of July.

Adult beetles can fly over short distances from tree to tree. No other data is available on flying distances, but A. mali is not considered to be a strong flyer. Movements of infested plant material can ensure spread of the pest over long distances. In China, it has been supposed that A. mali was introduced into Xinjiang in 1993 with infested apple seedlings from Shandong province, and then escaped to wild apple forests in the Tianshan Mountains. However, this hypothesis has not been confirmed by genetic studies which indicated that A. mali was probably not of recent introduction in the Tianshan Mountains.

Plants for planting of Malus spp., wood? furniture? from countries where A. mali occurs.

Apple (Malus domestica) is widely grown in the EPPO region, mainly for fruit production but also for ornamental purposes, and is of major economic importance. Data is lacking on the cultivation of M. sieversii in the EPPO region, but from a quick Internet search, this plant is available for online sale from a number of nurseries. M. sieversii is native to Central Asia (Kazakhstan, Kyrgyzstan, Tajikistan, Uzbekistan, and northeastern Afghanistan) and is considered to be the main progenitor of all domesticated apple species. It is an important resource for apple breeding because of its rich genetic diversity. M. sieversii is listed as a vulnerable species by the International Union for Conservation of Nature (IUCN). In the wild apple forests of the Tianshan, A. mali has shown invasive behaviour and caused severe damage. Due to the fact that A. mali spends most of its life cycle inside trees, control is generally difficult. Options for controlling A. mali are pruning of infested branches, insecticide treatments and biological control. Research is being carried out in China to identify potential biological control agents which may regulate A. mali populations, in particular in wild apple forests where other control options are not practical. Although more data would be needed on the economic impact of A. mali on cultivated apple in orchards and nurseries, and on its potential for establishment in the EPPO region (outside its native range), more attention should be paid to this pest and its introduction into apple production should be avoided.