Phytophthora pluvialis was discovered in several woodlands in the United Kingdom at the end of 2021, affecting mature western hemlock and Douglas-fir trees. This is the first report of this pathogen in the EPPO region. The Panel on Phytosanitary Measures suggested that it is added to the EPPO Alert List to raise awareness of other EPPO countries. 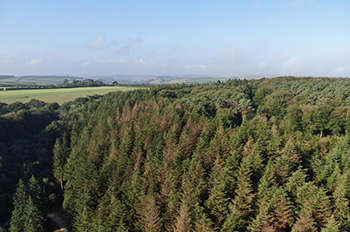 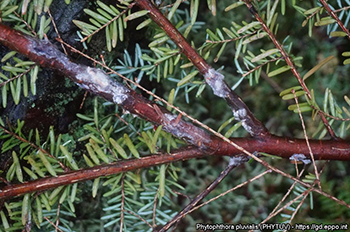 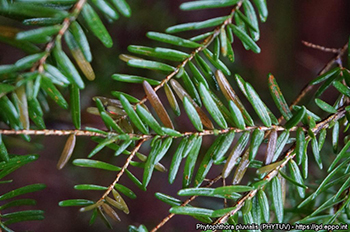 The species is considered as probably native from North-Western USA.

In the USA, P. pluvialis was first observed on Pseudotsuga menziesii and Notholithocarpus densiflorus. In New Zealand, it was recorded on Pinus radiata, P. patula and P. strobus. In the United Kingdom, it is causing cankers on Tsuga heterophylla. As P. pluvialis has expended its host range when introduced to new areas, some authors consider that this pathogen has the potential to infect a broader range of hosts than is currently recognized.

P. pluvialis is known to cause needle cast, shoot dieback, and lesions on the stem, branches, and roots of host plants. In the USA and New Zealand, P. pluvialis is mainly a needle pathogen. It causes red needle cast disease on Pinus species: symptoms start as discrete olive-coloured lesions on the needles, then turning yellow to red brown. This eventually can lead to premature defoliation of the lower crown and occasionally of the entire tree. In the United Kingdom, in addition to symptoms on needles, branch and stem cankers have been observed and resulted in severe tree decline.

A guide of symptoms observed in the United Kingdom is available on Forest Research website, and photos are available in EPPO Global Database: https://gd.eppo.int/taxon/PHYTUV/photos

P. pluvialis has been isolated from soil, water, and tree foliage and stems. Like other Clade 3 Phytophthora spp., P. pluvialis disperses aerially over relatively short distances, via rain splash and wind-driven rain. Like other Phytophthora spp., it could probably be transported on footwear and vehicles from infested areas. In trade it can be transported on infested plant material. Analysis demonstrated that the epidemics in New Zealand was linked to a single introduction from Oregon. In New Zealand, the first symptoms were observed in 2008 in one area, and in 2018 its presence was recorded in both North and South Islands.

Pinus, Tsuga and Pseudotsuga are widespread in the EPPO region, both in forest and in urban areas. P. pluvialis has already been introduced in the last decade in New Zealand and the United Kingdom, and could therefore also be introduced in other EPPO countries. P. pluvialis causes defoliation and severe decline on its hosts. Its host range has expanded when introduced to new areas. Climatic requirements of this pathogen are not yet fully known but it is established in cool wet climate of the Pacific Northwest USA as well as in warmer areas in New Zealand. Therefore, at least the western part of the EPPO region is at risk.