Tar spot is a foliar fungal disease of maize (Zea mays) which is emerging in the USA and causing economic damage to maize crops. There is some debate about the causal agents of this disease. In Latin America where the disease is thought to be endemic, tar spot has been associated with several fungal species: Phyllachora maydis, Monographella maydis and Coniothyrium phyllachorae. In Mexico, it was reported that on maize plants, infections by Phyllachora maydis were then followed by Monographella maydis infections, and that the latter was responsible for the appearance of ‘fisheye’ lesions on the foliage. However, in the USA, where this type of foliar symptoms is also observed, only P. maydis has been detected in maize plants affected by tar spot. Considering the importance of maize and the absence of tar spot in the EPPO region, as well as the fact that the disease is causing economic damage in its introduced range, the EPPO Secretariat considered that Phyllachora maydis could usefully be added to the EPPO Alert List. 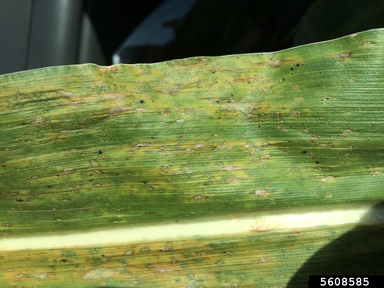 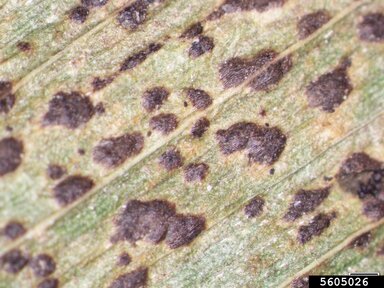 P. maydis was initially described in 1904 in Mexico and occurs in several countries of Central and South America. In 2015, the fungus was first recorded in the USA, in Illinois and Indiana (EPPO RS 2016/016), and then spread to other states.

Maize (Zea mays) is the only known host.

Initial symptoms of tar spot are small chlorotic lesions, followed by the development of brown to black stromata (0.5-2.5 mm diameter – fruiting bodies of P. maydis) scattered across the upper and lower leaf surfaces. In severe cases, these symptoms can also be observed on leaf sheaths and husks. Stromata are sometimes surrounded by brown, elliptical, necrotic halos (fisheye lesions). In severe cases, these lesions coalesce, causing extensive necrosis and leaf blight leading to premature senescence and death of maize plants. Tar spot can reduce maize grain yield, quality of silage, stover and husks. Yield loss has been attributed to reduced ear weight, poor kernel filling, loose kernels, and vivipary (germination of seeds before they reach maturity). In Latin America, grain losses ranging from 10 to 45% have been observed in case of severe epidemics. In the USA, up to 30% grain yield losses have been reported.

The disease cycle is not fully understood. P. maydis overwinters (as ascospores and conidia in stromata) on decaying maize leaves or residues remaining in the fields. It is thought that infected plant residues are the source of primary inoculum. Ascospores are released from stromata and are dispersed by wind and rain during periods of moderate temperature (16 to 23°C), leaf wetness duration of more than 7 h per night, and relative humidity of more than 75%. Ascospores then infect nearby maize plants and this cycle is repeated multiple times during the growing season. It has been shown that ascospores could be dispersed as far as 31 m from the inoculum sources. P. maydis is not known to be seedborne, and it is not known how P. maydis reached the USA. It is suggested that infected leaf/husk residues contaminating traded grains could be a pathway to spread the disease over long distances.

Maize is widely grown in the EPPO region and is an economically important crop. Tar spot is an emerging disease of maize in the USA and is considered there as a threat to maize production. Control strategies against the disease are currently limited and further research is needed. It is estimated that control will probably have to rely on good cultural practices (e.g. rotation, removal of infected plant residues), biological control or appropriate fungicide treatments and use of tolerant/resistant maize varieties (none are available at present). As there is a general lack of information about tar spot and P. maydis, the possible risks for the EPPO region are difficult to assess. In particular, the pathways for introducing the fungus into new areas would need to be better understood. However, the recent emergence in the USA and the economic damage observed advocate for caution, and the EPPO Secretariat felt that the attention of NPPOs should be attracted to this maize disease.