Sarracenia purpurea (Sarraceniaceae) is a carnivorous pitcher plant native to North America. It occurs in the natural environment in several EPPO countries with a limited distribution, often in sites of high conservation importance where it poses a risk to natural plant communities and associated ecosystem services. The species is adapted to the Western European climate and therefore there is the potential for further establishment of the species in suitable habitats. 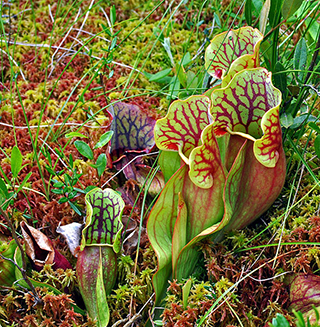 Sarracenia purpurea is a carnivorous plant which attracts insects and other small animals to its pitchers (pitfall trap), where they are then digested. It reproduces by seed which are abundantly produced (up to 1 000 seeds per inflorescence) and remain viable in the seed bank for up to five years.

In Western Europe, habitats where S. purpurea has become invasive include raised and blanket bogs and mires. Most populations in the United Kingdom occur below 100 m altitude. Once planted, populations can be very persistent.

In most, if not all, of the sites where S. purpurea occurs in Europe, it is believed to have been deliberately planted, presumably by carnivorous plant enthusiasts. There is the potential for movement of seed via water and movement of habitat material (e.g. soil or mosses) which includes seed.

Where S. purpurea is present in abundance, it can outcompete native vegetation in particular displacing the bryophyte community. The presence of the species is also likely to restrict habitat availability of higher plants. The tendency for this species to be planted in habitats with high conservation potential may exacerbate its impacts.

Manual removal of plants has been shown to be successful when controlling small populations. Hand-pulling is relatively quick and cost-effective but regeneration from the seed bank is likely. Chemical application (glyphosate) has been shown to kill the plant with no impact on the associated bryophyte community. However, non-target effects on higher plants have been reported. In the EPPO region, action has been taken to remove populations of this species in Belgium and the United Kingdom.