Euphorbia heterophylla is native to the Americas. 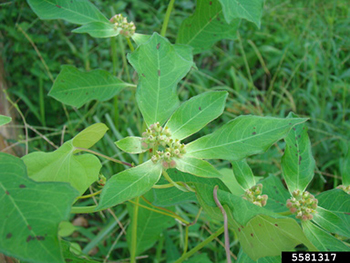 Inflorescence: compact axillary or terminal cyme consisting of clusters of flowers, each with basal bracts

Flowers (cyathia): inconspicuous, consist of small cup-like structures (2-2.5 mm long) each containing several small male flowers and one female flower. The cyathia are greenish or yellowish and each one is borne on a separate stalk.

All parts of the plant contain a milky sap.

Euphorbia heterophylla is a monoecious C4 annual species with a taproot. Seeds germinate over an extended period and over a wide range of environmental conditions. Each plant can produce over 4 500 seeds during a growing year. The species is a problematic weed in its native and non-native range.

Euphorbia heterophylla can be spread as a contaminant of grain and potentially seed. Interceptions in Russia in recent years have showed the presence of E. heterophylla seeds in soybeans shipments transported from the Americas for oil and meal production. Occasionally, E. heterophylla is utilised as an ornamental species. It was introduced in Europe in 1806, in botanic gardens and as an ornamental plant. Seed can be spread by water and by contaminated agricultural produce and soil attached to vehicles and animals.

Control using chemicals only is difficult and there are a number of reports of herbicide resistance. In most crops, mechanical and manual control measures are effective if done on a timely basis several times a season. The integration of mechanical, manual, cultural and herbicide use into well planned management systems is the best approach to E. heterophylla control.