Euphorbia davidii has been present in the EPPO region for a number of years where it occurs often in small populations along railway lines. However, E. davidii can also invade agricultural habitats and recently the species has been reported in new areas in Central Russia. 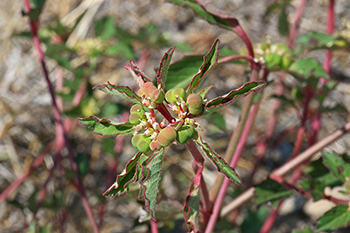 Euphorbia davidii is an annual species that spreads locally by seed. In the EPPO region (Serbia) flowering occurs in August-September and fruiting in September – October.

The potential pathways for entry into the EPPO region are unclear. However, it is suggested in the literature that the species may have entered as a contaminant of seed consignments.

Euphorbia davidii can form dense stands in agricultural areas. There are observations from Serbia that the presence of dense patches can have a negative effect on the size of maize plants and can initiate early ripening of sunflower heads.

Chemical control options include foliar spraying which has been assessed but with limited effectiveness.