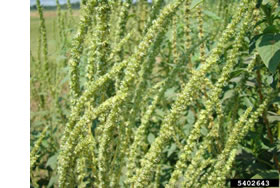 Amaranthus palmeri (Amaranthaceae) is an annual plant originating from Western North America. One of its English common names is ‘Palmer’s Amaranth’. The species is a troublesome weed in the Southern USA. The species is recorded as established in Cyprus, Israel and Madeira, and recently, it has been reported in a maize field in Spain. Considering the potential economic impact of this species, the EPPO Panel on Invasive Alien Plants suggested its addition to the EPPO Alert List.

Geographical distribution
EPPO region: Cyprus, Israel, Portugal (Madeira), Spain.
Note: the species has been observed as casual in Austria, Belarus, Belgium, Czech Republic, France, Germany, Latvia, Netherlands, Norway, Russian Federation, the United Kingdom and Sweden.
In Spain, A. palmeri was found for the first time in 2007 in Lleida (Cataluña) in North-Eastern Spain, at the margin of a maize field. The species had previously been recorded in Andalucía at the port of Sevilla and in Palos de la Frontera (province of Huelva) in the vicinity of industrial premises where seeds and plant products are processed.

Note: the GBIF website provides a distribution record of the species in Ethiopia, though, no further information could be found.

Morphology
A. palmeri is an annual plant with one central reddish-green stem up to 1.5 m tall with many lateral branches. Leaves are alternate, hairless, borne on long petioles that often exceed the length of the leaf blade, they are lanceolate in young plants and become ovate as the plant matures, with prominent whitish veins on the underside. The leaves often have a distinctive V-shaped chevron on the upper surface. Female and male flowers occur on separate plants, but are both 2 to 3 mm each, clustering in cylindrical inflorescences or spikes up to 60 cm on the central stem. The fruit is a thin-walled one-seeded utricule about 1.5 mm long. The top half of the fruit separates at maturity to expose the single, round, black to dark purple seed which is of 1 to 2 mm in diameter.

Biology and ecology
A. palmeri is a dioecious species and is generally wind-pollinated as male flowers produce copious amounts of pollen. This dioecy allows for gene exchange among plants, and is considered to be a factor enhancing herbicide resistance. In its native desert habitat, A. palmeri grows as a summer ephemeral herb and is adapted to the rigors of intense heat and low unpredictable rainfall. Maximum seed germination was determined to be achieved at temperatures around 30°C. In California, studies showed that female plants emerge between March and June, and are prolific seed producers, with 200 000 to 600 000 seeds per plant when growing without competition. Plants that emerge later were observed to produce fewer seeds (< 80.000 seeds per plant). Seed bank densities grew from 173 million seeds per ha to 1.1 billion seeds per ha between 1980 and 1985. The small size of the seeds necessitates a relatively shallow position within the soil profile for successful establishment. Seed germinate in 1 or 2 days. The seed bank viability is unknown but is suspected to be able to survive extended periods. Seeds have been reported to be viable after 12 years of burial, although 50% seed mortality was observed for seed buried for 18 months. 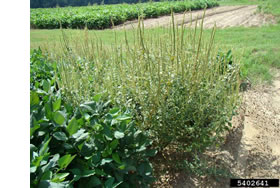 is found in fields of many crops, in particular cotton, maize, soybean, peanut, sweet potato and other vegetables. It also colonizes field borders, roadsides and railroads. According to the CORINE land cover classification, the following habitats are suitable for the plant: arable land; deserts (sparsely vegetated areas); road and rail networks and associated land; other artificial surfaces (wastelands).

Pathways
A. palmeri is suspected to have entered Belgium as a contaminant of grain, and to have entered the United Kingdom as a contaminant of oil seed rape. Entry may also occur through used machinery as spread has been reported to occur during agricultural management practices such as plowing, mowing, harvesting and moving compost of green waste. The small seeds are predominantly gravity-dispersed, but can also naturally be spread through water flow and irrigation, as well as via the movement of birds and mammals. Although the seeds have no wind dispersal adaptations, strong winds and hurricanes are considered to be responsible for the spread of the species.

Impacts
The invasive behaviour and range expansion of the species is relatively recent. A. palmeri has in the last years been ranked as the most troublesome cotton weed in the southern US. In 2014, at least 300 000 ha of cotton are reported as invaded by the weed in Arkansas, and over one million acres in Georgia. A. palmeri significantly affects growth and yield of crops. In the USA, A. palmeri densities of 1 and 10 plants per m² reduced cotton yields of 11 and 59% respectively. Major impacts have also been reported in soybean, peanut, corn, sweet potato and the plant has become one of the most economically damaging glyphosate-resistant weed species in the USA. In the USA, the maximum predicted soybean loss was 79% from full season interference of A. palmeri (density of 8 plants per m²). Full season interference from the weed reduced peanut yield by 68% (density of 5.5 plants per m of row). A. palmeri with its rapid growth rate and ability to accumulate large quantities of biomass is very competitive, and has also an advantage with its long roots. In addition to reducing yields, the large amount of biomass produced interferes with harvesting of crops. In cotton, the presence of A. palmeri doubled to quadrupled harvest time, compared to a weed free field. Equipment can even be damaged if densities of A. palmeri are higher than 0.65 plants per m². A. palmeri may also affect or suppress crop growth through allelopathy. Experiments indicate that incorporation of a heavy stand of A. palmeri into the soil just before planting can hinder seedling growth in carrot, onion, cabbage and sorghum. A. palmeri also acts as a host to several nematodes.

Control
In some areas, A. palmeri has developed resistance to herbicides, including triazines and glyphosate. Resistance to 5 different herbicide modes of action has been confirmed for this species. No control regime based on a single herbicide is likely to be successful for more than 4 to 5 years. Tillage and the use of cover crops have been comprehensively investigated for managing A. palmeri. Deep tillage in autumn followed by a cover crop of rye provided good results. Germination and seedling establishment are significantly reduced when the seed of the plant is buried at depths of 5 cm or more in the soil, cultivation practices that achieve this can be useful management methods. Controlling the seed bank is also an essential component of integrated management of A. palmeri. Cultural practices such as appropriate planting dates, crop rotation, hand weeding and improved sanitation to avoid spread improve the control of the weed. Hand-pulled plants can nevertheless re-root and produce seed if left on the soil, hand wedding therefore needs to be done with care. The management of A. palmeri in field borders, roadsides and railroad highways is often overlooked, building up reservoir populations of the weed.