Ageratina adenophora (Asteraceae) is a perennial herb that is an invasive alien species in many regions of the world. In the EPPO region, it is present in isolated populations in Algeria, France, Italy, Portugal, and Spain. The EPPO Panel on Invasive Alien Plants recommended that an EPPO pest risk analysis is conducted for A. adenophora in 2023. The species is added to the Alert List to raise attention concerning the species and seek further information on its occurrence and behaviour in the EPPO region. 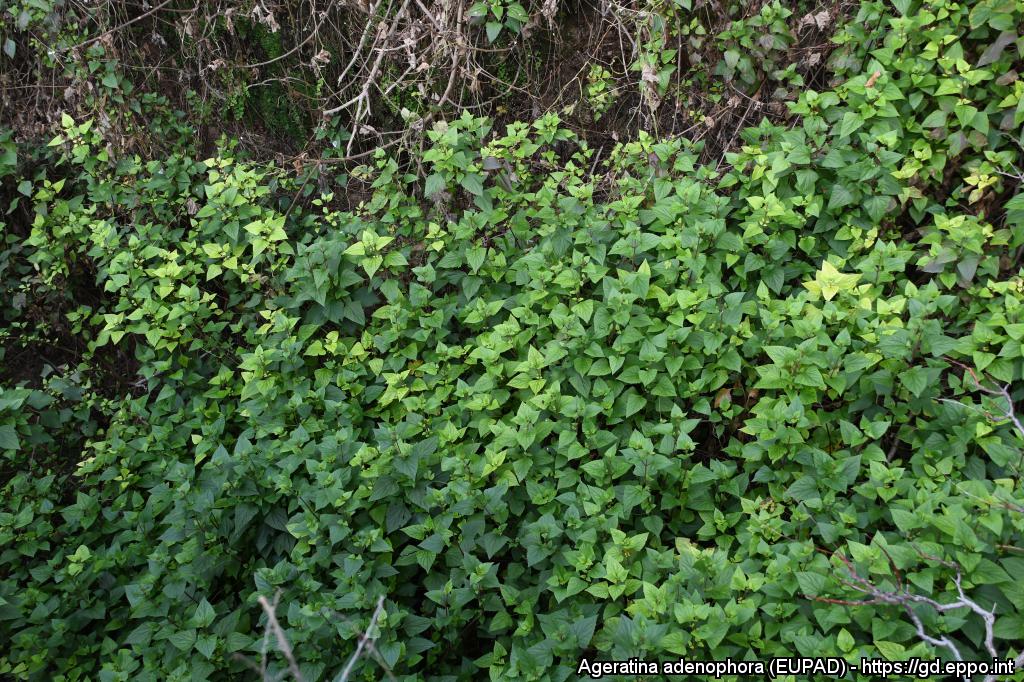 Stems purplish, numerous, erect, smooth, cylindrical; shortly branched towards the apex, 1-2 m long, occasionally longer; glandular, hairy at first but becoming woody with age. Leaves dark green; opposite, broadly trowel-shaped, 5-8 cm long, (2.5-)3-7.5 cm wide, with serrated edges, tapering towards the apex and narrowing abruptly at the base into a slender stalk 2-4 cm long; 3-nerved, glabrous or slightly pubescent, toothed along the apical margins. Petioles are brown. Flowers comprise 50 to 70 white, tubular florets about 3.5 mm long; grouped into heads 5-6 mm diameter within a row of green bracts and arranged in flat clusters up to 10 cm across at the end of the branches. Seeds are dark brown to black, slender, angular, 1.5-2 mm long with 5 to 10 fine white hairs approximately 4 mm long.

Each plant can produce 100 000 seeds in a growing season. The species exhibits a fast growth rate that can facilitate the formation of a dense monoculture.

Ageratina adenophora can invade ruderal habitats (railways, roadsides), agricultural habitats, open woodland, forest margins. In the EPPO region it is found in frost free regions in the Mediterranean area and Atlantic islands though climate change could increase the area of potential establishment. In France, it invades riparian habitats and in Italy it is recorded along riverbanks and wet rocky coastal areas.

The seeds of A. adenophora can be a contaminant of used machinery and equipment, soil or growing media attached to plants. Seeds can also be moved via livestock and seeds can become attached to clothing and recreational equipment. A. adenophora has been utilised as an ornamental species in the 19th century. Natural spread is via seed which can be dispersed by wind and water.

Mechanical and chemical control methods can be effective at controlling populations of the plant. Herbicides can be applied to the foliage when the plant is growing. Biological control has been applied throughout its invasive range utilising arthropod and fungal biological control agents with varying success.