As repeated interceptions of Spodoptera ornithogalli (Lepidoptera: Noctuidae) were made in 2020, particularly on consignments of Asparagus from the Americas, the NPPO of the Netherlands suggested that this pest should be added to the EPPO Alert List. This proposal was also supported by the Panel on Phytosanitary Measures. 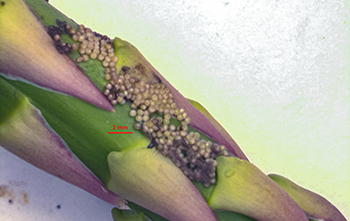 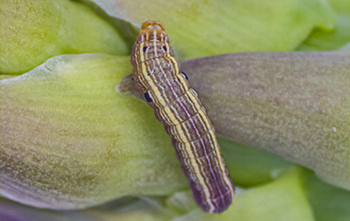 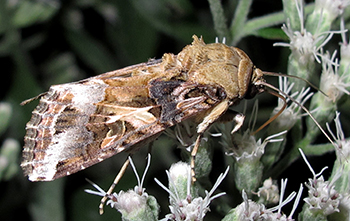 Recent taxonomic studies have concluded that S. marima (present in South America) is a synonym of S. ornithogalli (North and Central America and the Caribbean), therefore the geographical distribution of this pest now covers the whole American continent. S. ornithogalli has not been reported in other parts of the world.

S. ornithogalli is a highly polyphagous pest which can damage economically important crops such as asparagus, bean, beet, cotton, maize, tomato, pepper, potato, sunflower, sorghum, soybean, wheat, as well as ornamentals such as chrysanthemums and roses. It can also be found on weeds (e.g. Amaranthus retroflexus, Chenopodium album, Datura stramonium, Erigeron canadensis, Plantago lanceolata, Rumex). A list of hosts can be viewed in the EPPO Global Database.

Damage is mainly caused by larvae of S. ornithogalli feeding on aerial plant parts. The small gregarious larvae tend to skeletonize leaves, and later stages consume irregular patches of foliage or entire leaves. Larvae can also feed on fruits of plants such as tomato, and cotton (capsules), or on flowers. In the USA, S. ornithogalli is considered to be a pest of economic importance mainly in the southeastern parts of the USA, however significant damage may occasionally be reported from northern parts.

In North America, 3 to 4 generations have been observed. Eggs are laid in clusters (200 to 500 eggs), usually on the underside of leaves. There are generally thought to be 6 larval instars, although up to 7 have been reported. Larvae grow from about 2 to 35 mm throughout their development. Larvae pupate in the soil. Adult moths have a wing-span of 34 to 41 mm. Their front wings are brownish grey with a complicated pattern of light and dark markings. Hind wings are opalescent white, with a narrow brown margin. Pictures of the pest can be viewed on the Internet.

Adult moths can fly. In North America, the pest overwinters in warmer areas and migrates northwards each year. No detailed data could be found on the flight abilities of S. ornithogalli, but other Spodoptera species (e.g. S. frugiperda) are known to be strong fliers. Over short distances, larvae can also balloon on silk threads blown by the wind. Over longer distances, S. ornithogalli can be spread with its host plants or with soil (as pupae).

S. ornithogalli has many hosts that are major crops in the EPPO region. It can be recalled that S. ornithogalli had been screened in the EPPO study on ‘Pest Risks associated with the import of tomato fruit’ as a pest posing potential risks to tomato production in the EPPO region. Recent interceptions of infested consignments of asparagus clearly show that the pest has a pathway to enter the EPPO region. In the 2000s, Japan had also reported interceptions of infested asparagus from Mexico and the USA. In addition, in the EPPO Study, it had been shown that climatic conditions in the EPPO region were favourable to the establishment of the pest, although the northern limit of overwintering remained uncertain. In its risk assessment of American species of Spodoptera, the Netherlands Food and Consumer Product Safety Authority concluded that S. ornithogalli (as was also the case for S. eridania, S. frugiperda and S. praefica) presented risks for the European Union. The introduction of S. ornithogalli is likely to cause significant losses in various crops, especially in the Southern parts of the European Union. Although further assessment is needed, this conclusion could most probably be extended to the Southern part of the EPPO region.

Takahashi G (2002) Notes on some Noctuid species intercepted on asparagus produced in America and Mexico at import plant quarantine of Narita Airport in Japan. Research Bulletin of the Plant Protection Service, Japan no.38, 105-110.