Saperda tridentata (Coleoptera: Cerambycidae – elm borer) is a pest of Ulmus species native to North America. Because it has been intercepted in the EPPO region several times on traded elm wood from the USA, and it is now included in the EU Commission Implementing Regulation 2018/2019 of 18 December 2018, the EPPO Panel on Quarantine Pests for Forestry suggested that S. tridentata is added to the EPPO Alert List. 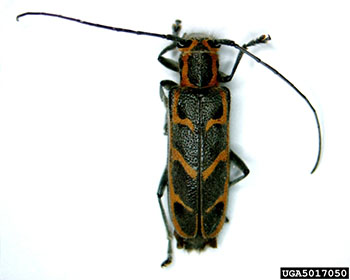 S. tridentata is native to North America and has not been reported from other parts of the world.

S. tridentata feeds on Ulmus species. Its preferred host is U. americana (American elm), but U. rubra (slippery elm) and U. crassifolia (cedar elm) are also attacked. It can probably feed on other North American elm species, but data on the susceptibility of these potential host species is lacking. According to the literature, S. tridentata does not infest the European species, U. minor (English elm), but this remains to be confirmed. It must be underlined that information is lacking about the susceptibility of elm species that are present in the EPPO region (e.g. U. glabra, U. laevis, U. minor).

S. tridentata is a wood borer whose larvae feed in galleries under the bark of elm trees. Adult beetles feed on leaves and petioles. The first sign of infestation by S. tridentata is the appearance of thin, yellowish foliage followed by dying of some branches (often scattered over the tree). On the trunk and branches, reddish frass is extruded from tiny openings in bark crevices. As the infestation progresses, large pieces of loosened bark can easily be stripped from the tree, and galleries can be observed in the inner bark. Larvae feed in the region between the inner bark and outer layer of the sapwood, and only pupal cells extend down into the sapwood (3-6 mm deep). Ovipositing females usually choose elm trees that are already weakened by drought, diseases or other causes. The presence of numerous larvae boring galleries can girdle the trunk and kill the tree. In addition to direct damage caused by larvae, it is reported that beetles of S. tridentata can transmit Dutch elm disease (Ophiostoma ulmi) from diseased trees to healthy ones.

Adults are 9 to 17 mm long, blackish with dense grey pubescence and three orange oblique crossbars on the elytra, as well as narrow stripes on each side of the pronotum and the base of the elytra. On male beetles, antennae can be almost as long as their body. In its native range, S. tridentata usually has one generation per year, but in some cases the life cycle extends to 2 or 3 years. Adult beetles emerge from elm trees in May and June, leaving round exit holes of 3 mm diameter on the bark. For one month, females lay eggs (singly) in bark crevices at night. After hatching larvae feed initially in the outer corky layer of the bark and later move to the phloem layer creating extensive galleries. From August to October, larvae bore chambers where they overwinter. In March and April, pupation takes place, lasting from 15 to 33 days. 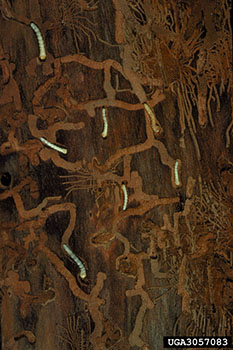 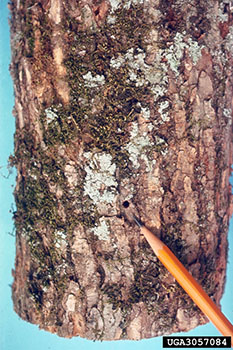 No data is available on the natural spread of S. tridentata, nor on the flying capacity of adult beetles. Over long distances, movements of infested plants and wood can transport the pest. From 2016 to 2019, S. tridentata has been intercepted by the Italian NPPO at least 6 times on elm wood (U. rubra) imported from the USA. 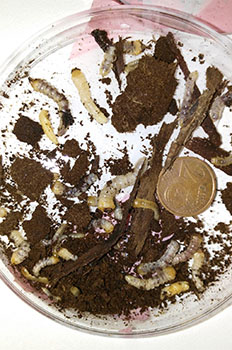 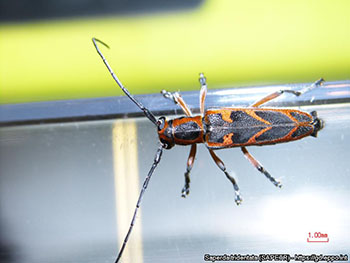 In the EPPO region, elms are valuable trees used for wood production and landscaping which have already been decimated by Dutch elm disease epidemics (O. ulmi, O. novo-ulmi). In North America, S. tridentata is considered as a pest of weakened trees but high levels of infestation can cause tree mortality. Management measures rely on cultural practices to keep trees vigorous and on the removal of severely infested trees to reduce pest populations. Parasitoids of S. tridentata have been observed in the USA but they are not considered to be sufficiently efficient to prevent economic damage. The fact that S. tridentata can cause mortality on American elm trees, that it can transmit Dutch elm disease, and that it can be moved in trade of elm wood advocates for caution. However, there is still a high uncertainty about the susceptibility of elm species that are present in the EPPO region, as well as a general lack of data on the economic impact of the pest in its native range.

Commission implementing regulation (EU) 2018/2019 of 18 December 2018 establishing a provisional list of high risk plants, plant products or other objects, within the meaning of Article 42 of Regulation (EU) 2016/2031 and a list of plants for which phytosanitary certificates are not required for introduction into the Union, within the meaning of Article 73 of that Regulation. Official Journal of the European Union L 323, 10-15. https://eur-lex.europa.eu/legal-content/EN/TXT/PDF/?uri=CELEX:32018R2019&from=EN

Heffern DJ (1998) Insects of Western North America. A survey of the Cerambycidae (Coleoptera), or longhorned beetles of Colorado. Contributions of the C.P. Gillette Museum of Arthropod Diversity Department of Bioagricultural Sciences and Pest Management, Colorado State University (US), 32 pp.

Linsley EG, Chemsak JA (1995) The Cerambycidae of North America, Part VII, No. 2: Taxonomy and Classification of the Subfamily Lamiinae, Tribes Acanthocinini through Hemilophini. University of California Publications in Entomology, p 188.

Pechuman LL (1940) Notes on the feeding and breeding habits of Saperda tridentata Oliv. Bulletin of the Brooklyn Entomological Society 35(4), 113-116.