The attention of the EPPO Secretariat was attracted by colleagues from USDA-PPQ-APHIS to the emergence of Fiorinia phantasma (=Fiorinia coronata - Hemiptera: Diaspididae) in the USA. F. phantasma is a polyphagous pest of ornamental plants, with a preference for palm tree species. It was initially described from specimens collected in 1914 on Neolitsea sp. in the Philippines (Mount Makiling, Luzon Island). It was found in 2004 in Hawaii (US), first on the island of Oahu infesting landscape palm trees, and then on other ornamentals (in nurseries and the landscape) on the island of Maui. A recent taxonomic review of this scale species concluded that Fiorinia coronata was a synonym of F. phantasma, and that this scale was present in more than 20 countries, thus suggesting that it is spreading. Finally, heavy infestations F. phantasma were discovered in March 2018 in continental USA, in Florida (Miami-Dade county) on Phoenix canariensis. Considering the polyphagy of F. phantasma and its capacity to be moved between continents on plant material, the EPPO Secretariat felt that it could usefully be added to the EPPO Alert List. 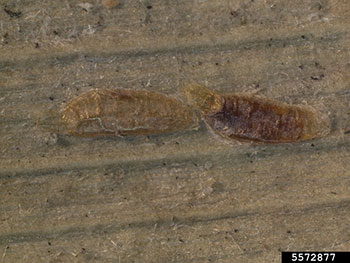 F. phantasma is thought to originate from South-East Asia.

EPPO region: Absent. However, incursions have been reported on glasshouse plants in France (a ‘crocodile farm’ glasshouse) and the Netherlands (a nursery), as well as in the United Kingdom on a potted bamboo plant in a restaurant. These incursions have not led to the establishment of the pest.

Asia: China (Hong Kong), Indonesia (Irian Jaya), Malaysia (West), Maldives, Philippines, Singapore. Infested plants have been intercepted by several countries (e.g. the Republic of Korea, USA) on imported plant material from Thailand, Taiwan and Vietnam, but the presence of the pest in these countries could not be confirmed by other sources.

F. phantasma infests the undersides of leaves of its host plants. However, when populations reach high densities, crawlers begin to colonize the upper leaf sides. Feeding damage by F. phantasma causes yellow blotches on the upper leaf surfaces of host plants. As the scale population increases, intense feeding damage to the foliage causes leaf drop, loss of plant vigour and stunting. Heavy infestations and damage have been reported from palm trees in Hawaii, Grenada and Maldives. Adult females of F. phantasma are approximately 1.25 mm long, ‘mussel-shaped’ and inconsistently show red stripes, running across their width. Females are pupillarial (as is the case for other Fiorinia species), which means that they shrink in size, encased in their second shed skin. Male scales are white.

Crawlers can move over short distances and wind can facilitate species dispersal (but no detailed data could be found). Over long distances, trade of infested plants is suspected to play an important role in the pest spread. In particular, several countries have intercepted F. phantasma on imported ornamentals.

F. phantasma is a polyphagous pest which can feed on many species that are grown for ornamental purposes in the EPPO region. In addition, its host range includes date palm (P. dactylifera) which is an economically important crop in parts of the EPPO region. In Hawaii, F. phantasma is considered to be a major pest of ornamental and landscape plants and has negative impacts on the local nursery and landscape industry. Its recent introduction into Florida is also considered as a serious threat, in particular for palm trees that are widely planted. Chemical control of scales is usually difficult. Biological control might be an option, as in Hawaii parasitoids (Aphytis sp., Aphelinidae) and predators (Telsimia nitida (Coccinellidae), Cybocephalus nipponicus (Cybocephalidae), Chrysoperla comanche (Chrysopidae), and Aleurodothrips fasciapennis (Phlaeothripidae)) have been observed attacking F. phantasma, but their efficacy remains to be studied. The recent spread of F. phantasma to different countries, its interceptions on imported plant material, and its recent incursions demonstrate that it has the potential to enter the EPPO region. However, more studies would be needed on its potential of establishment in the EPPO region. Considering that it is a ‘tropical’ pest, it is probably not able to survive winter conditions in most parts of the EPPO region, but it could still be a threat to many glasshouse ornamentals that are high value crops.

Malumphy C (2013) First incursion of crown scale Fiorinia coronata Williams & Watson (Hemiptera: Diaspididae) in England, with a review of Fiorinia species detected in Britain and a key to their identification. Entomologist’s Gazette 64, 269-276.