The red turpentine beetle, Dendroctonus valens (Coleoptera: Scolytidae), originating from North America was introduced into China (counties of Yangcheng and Xinshui - Shanxi province) in the early 1980s. In 1999, it was found in Hebei province and by 2003 this bark beetle had spread to 85 counties in 3 provinces of Northern China covering an area of more than 700 000 ha causing damage to pine trees. In China, it is estimated that D. valens has killed more than 10 million pine trees since its introduction, mainly Pinus tabulaeformis (Chinese red pine), a species which has been widely planted in monoculture during reforestation programmes. Genetic studies conducted in China in 2005 indicated that D. valens was introduced from the Pacific Northwest of the USA, probably via multiple introductions. However, other studies comparing the symbiont fungi associated with D. valens in North America and China, suggest an introduction from Eastern North America. It is suspected that the introduction of D. valens into China has been associated with imports of unprocessed logs of Pinus ponderosa for use in mine construction. Considering this ‘continental jump’ and the severity of damage reported from China, the EPPO Panel on Quarantine Pests for Forestry recommended that D. valens should be added to the EPPO Alert List. 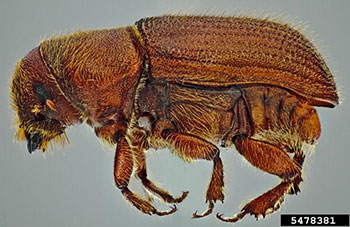 In North America, D. valens can be found on many pine species (Pinus spp.) and occasionally on spruce (Picea spp.) and larch (Larix spp.). In Western North America, P. ponderosa, P. contorta, P. jeffeyi, P. lambertiana, P. monticola and P. radiata are the preferred hosts. In China, the primary host is P. tabulaeformis. P. armandii, P. bungeana and Picea meyeri have occasionally been attacked, with some mortality reported on P. bungeana. In Shanxi province, P. sylvestris is a rare non-native species and it has occasionally been attacked by D. valens. As P. sylvestris is more or less continuously distributed across northern Eurasia, it is supposed that this pine species could serve as a potential corridor for the spread of D. valens into Europe.

D. valens mainly colonizes the lower trunk and upper root system. it feeds on the inner bark of its host plants creating galleries which can girdle the tree trunk and ultimately kill the tree. On attacked trees, large reddish-white pitch tubes (mixture of resin and frass) on the bark, or pellets on the ground around the base of the trees, are usually the first signs of infestation.

Several fungal species have been reported in association with D. valens, although their possible role in tree mortality needs to be further studied. In China, the most consistently isolated fungus is Leptographium procerum, and studies have indicated that it was most probably introduced into China along with D. valens. The fungi associated with D. valens in China are different from those in the insect’s native range (e.g. Leptographium terebrantis, commonly associated with D. valens in the USA, has not been found in China; conversely, L. sinoprocerum is a new species which has been collected from D. valens only in China).

In its native range in North America and parts of Central America, D. valens is considered to be a secondary pest of pines in forests. It usually infests weakened or dying trees. It is often found in association with other bark and wood boring beetles (e.g. Ips and other Dendroctonus) but outbreaks and tree mortality attributed to D. valens alone are rare. In China, D. valens is considered to be a primary forestry pest and has killed millions of pine trees, as explained above. It is considered that the invasion of D. valens observed in China has been favoured by drought conditions, degradation of forest sites, presence of fungal associates and use of monocultures (e.g. P. tabulaeformis).

The eggs of D. valens are cylindrical with rounded ends, white, opaque and shiny, and about 1 mm long. The larva is a white, legless grub, with a brown head and brown tip to the abdomen. Fully grown larva is 10 to 12 mm long. The pupa is white and not enclosed in a cocoon. The adult beetle is 6 to 10 mm long and dark reddish-brown in colour. 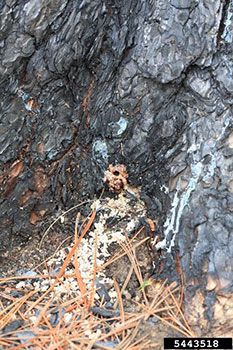 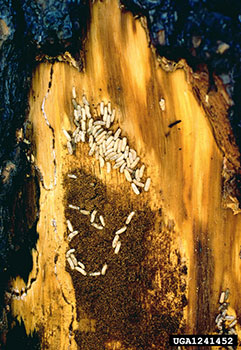 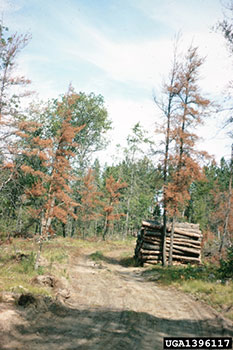 Adult beetles are strong fliers, the flight distance of D. valens was shown to exceed 16 km in North America. In China, its flight distance could reach up to 35 km, and D. valens has been able to overcome the Lüliang and Taihang mountain ranges, thus demonstrating remarkable long-distance and altitudinal migrating abilities. Over long distances, trade of infested plants or wood products can transport the pest.

Pine trees are widely planted across the EPPO region for forestry and ornamental purposes. D. valens is reported to attack many pine species, including species that are planted in the EPPO region (e.g. P. sylvestris, P. radiata), but data is generally lacking about the severity of damage of D. valens on other conifers. Due to the hidden mode of life of the insect, control of D. valens is difficult. In China, a national management programme was initiated in 2000 and included regulatory, sylvicultural, insecticidal, and semiochemical approaches. Entomopathogenic fungi (e.g. Beauveria bassiana) and predators (e.g. Rhizophagus grandis - Coleoptera: Rhizophagidae) have also been investigated as biocontrol agents. As D. valens could be a threat to pine trees in forests and urban environments, it is advisable to avoid its introduction into the EPPO region. It can be noted that several other American Dendroctonus species attacking conifer trees are already included on the EPPO A1 List (i.e. D. adjunctus, D. brevicomis, D. frontalis, D. ponderosae, D. rufipennis), but D. valens has never been specifically listed.

Bark and Ambrosia beetles of the US, Canada. Dendroctonus valens. http://www.barkbeetles.info/regional_chklist_target_species.php?lookUp=491