In September 2015, Crisicoccus pini (Hemiptera: Coccidae – Kuwana pine mealybug) was found for the first time in Italy causing damage to Pinus pinaster and P. pinea trees in the city of Cervia (Ravenna province, Emilia-Romagna region). In this city, infested pine trees were randomly distributed both along the roads and in private gardens. Considering the severity of damage observed and the fact that this mealybug of Asiatic origin could threaten pine trees, the Panel on Phytosanitary Measures suggested that C. pini should be added to the EPPO Alert List.

C. pini originates from Asia and was first described in Japan. It has been introduced into California (US), and there is an isolated record from the District of Columbia (US). In the EPPO region, before being found in Italy in 2015, C. pini had been recorded in 2006 in Monaco on P. pinaster trees growing in the Japanese garden of the city. 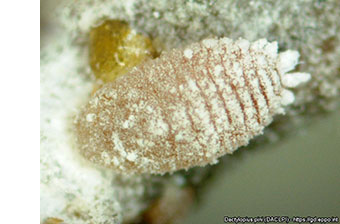 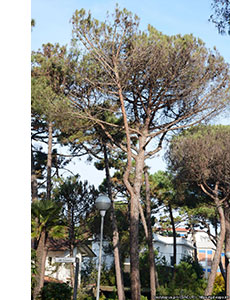 C. pini is apparently restricted to Pinaceae. According to the literature, C. pini has been recorded on Pinus coulteri, P. densiflora, P. halepensis, P. koraiensis, P. massoniana, P. nigra, P. parviflora, P. pinaster, P. pinea, P. radiata, P. tabuliformis, P. thunbergii. Abies sp. is also mentioned in a list of hosts, but this needs to be confirmed. Observations made in the city of Cervia (IT) have showed that C. pini attacked both P. pinaster and P. pinea (new host in Italy).

C. pini feeds and develops among the growing pine needles. As a consequence, needles become yellow and partially necrotic. Mealybugs also excrete honey dew on which sooty moulds subsequently develop. Canopies of attacked pine trees show partial to full necrosis, and in some cases tree mortality has been observed in the city of Cervia (IT). Data on the biology and life cycle of the pest is very scarce in the available literature.

Immature stages of mealybugs can move over short distances. Over long distances, all stages can be transported on infested plant material.

Plants for planting (including bonsais), cut branches of Pinus spp. from countries where C. pini occurs.

Pine trees are widely planted across the EPPO region for forestry and ornamental purposes. Data is generally lacking on the economic and environmental impacts of C. pini. In California (US) where the pest has been introduced, recent literature suggests that it is not a pest, although in the early 1990s it was reported that it could behave as a pest. Concerning the situation in Monaco, more recent information could not be found in the literature. In Italy, the introduction of C. pini and the observation of damage have triggered the implementation of phytosanitary measures. In March 2016, a national decree for ‘emergency measures to avoid the spread of Crisicoccus pini Kuwana in Italy’, as well as a pest control plan were adopted. In all infested sites, severely affected pine trees were destroyed, insecticide (abamectine) was applied by endotherapy and a predator Cryptolaemus montrouzieri (Coleoptera: Coccinellidae) was repeatedly released. In 2018 (after 3 years of control measures), chemically treated pine trees showed recovery, C. montrouzieri were still present and a reduction of scale populations was observed. As C. pini could be a threat to pine trees in urban environments and possibly in forests, it is advisable to monitor the situation of this pest in the EPPO region.

Miller DR, Miller GL, Hodges GS, Davidson JA (2005) Introduced scale insects (Hemiptera: Coccoidea) of the United States and their impact on US agriculture. Proceedings of the Entomological Society of Washington 107(1), 123-158.