Arboridia kakogawana (Hemiptera: Cicadellidae – Japanese grape leafhopper) is a pest of Asian origin, has spread within Russia and was recently found in Romania (EPPO RS 2020/006). Considering the importance of grapevine (Vitis vinifera) cultivation in the EPPO region, and the potential damage caused by this new pest, the EPPO Secretariat decided to add A. kakogawana to the EPPO Alert List. 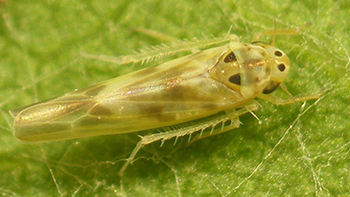 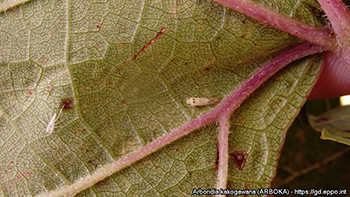 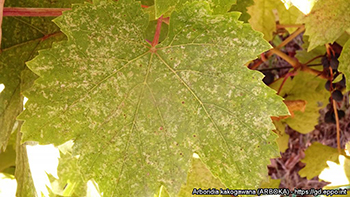 A. kakogawana was first described in Japan and then found in the Republic of Korea and the Russian Far East. It was discovered in 1999 in Southern Russia, and later in Ukraine, China, and in 2016 in Romania.

In its native range, A. kakogawana lives in broadleaved and mixed forests and feeds on Vitis amurensis. In Southern Russia, Crimea, the Republic of Korea and Romania, it is reported as a pest of grapevine (Vitis vinifera). In Romania, it was also recorded on Parthenocissus quinquefolia.

Nymphs and adults feed on the lower leaf surface, causing discoloration and necrosis which can then have negative impacts on the maturation of grapes. A. kakogawana is a leafhopper with body length of 2.6-3.1 mm. Adults are light yellow with brown or orange spots of the forewings. Nymphs are green-yellow.

In Romania, adults were trapped from early June to the middle of November. A. kakogawana has two to three generation per year in Russia and four in Xinjiang (China) and in Romania. In the Republic of Korea, observations have shown that, in October, adults move from vineyards to nearby forests in search of trees to overwinter under the bark.

Control is possible with insecticides, and biocontrol is also under study. However, in Romania, the normal insecticide treatments against Lobesia botrana could not control A. kakogawana. In addition the proportion of organic vineyards is increasing in Europe and this pest may be difficult to control in such cases.

Data is missing on its natural spread but adults can fly. Over long distances, host plants can transport the pest. Wood with bark can possibly transport A. kakogawana, as the insect overwinters under the bark of broad-leaved trees. Grapes are not considered a pathway by Biosecurity Australia (2011) as the pest is only associated with leaves.

Plants for planting of host plant species, wood with bark (as contaminant)?

Grapevine (Vitis vinifera) is an economically important crop in the EPPO region. In the Republic of Korea and Russia, A. kakogawana is considered as a pest of grapevine and has been spreading since the years 2000s. It is desirable to avoid its spread within the EPPO region. The fact that this pest was found in an EU country poses a new risk as import of Vitis plants for planting is prohibited from third countries into the EU.